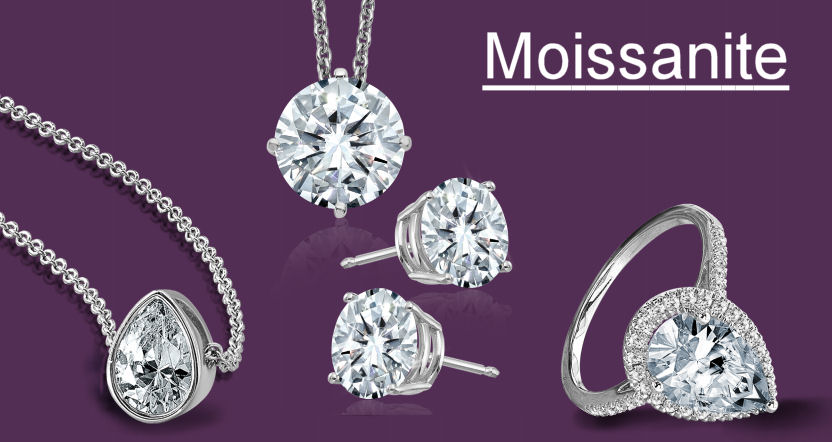 Next to Lab-Grown Diamonds, Moissanite is considered to be the very best Lab-Created alternative to mined diamonds, and for good reason. They are genuinely beautiful in their own right, very durable, and significantly less expensive than mined diamonds of comparable qualities.

First and foremost, Moissanite is a synthetic form of a naturally occurring rare mineral. Naturally occurring Moissanite comes from meteorites, but specimens are too small to be used for jewelry. Even so, recognizing the highly desirable optical and physical qualities of the material, scientists were motivated to find a way to create larger crystals in the lab. The creation process is lengthy, complicated, and expensive, which means the output for each gem can be limited. In fact, it can take two to three months just to create a single gem!

Second, Moissanite production has been pretty much perfected in recent years. While they may have been considered too flashy when they were first introduced, today’s advanced production methods yield near-colorless, large-sized rough that is ideal for cutting extraordinarily bright and sparkly gemstones.

Finally, Moissanite has some remarkable qualities and characteristics comparable to diamonds. Measuring 9.25 on the Mohs scale, Moissanite is harder than rubies and sapphires and is well suited for daily wear. With exceptional fire, brilliance, and luster, Moissanite sparkles like nobody’s business and the controlled production methods produce stones of very high clarity.

Moissanite requires no mining to reproduce, meaning it’s both environmentally and socially responsible. Moissanite is grown in a controlled environment, so its origins are traceable and meet some of the highest environmental standards. Even though moissanite is recreated in a lab, it’s an affordable gemstone and costs a fraction of a comparable diamond. When you decide to buy moissanite, you are making a conscientious choice to purchase an ethically sourced and sustainable gemstone. Choose Charles & Colvard moissanite to reduce the negative impact on the earth and change the environmental standards set by the fine jewelry industry.

For peace of mind, Moissanite stones are laser engraved and are accompanied by certificates of authenticity and limited lifetime warranties. Easy to care for, Moissanite is an increasingly popular choice for engagement rings and traditional wardrobe staples.

The chemical structure of moissanite allows it to slow down, bend, and redirect light better than any other gemstone. On the Brilliance Refractive Index, it measures at a whopping 2.691 – making it the world’s most brilliant gem.

The toughness and durability of a gemstone are tested on the MOHS scale of mineral hardness. This qualitative scale characterizes the hardness and scratch-resistance of various gemstones and minerals. Moissanite ranks second only to diamond, meaning not only is it a tough gemstone, but a durable one that can stand up to daily wear.

Fire, or dispersion, marks a gemstone’s ability to split light as it passes through the stone, creating a rainbow-like effect. Moissanite has a fire dispersion measured at 0.104, nearly 4X greater than any other popular gemstone.