Chain Types: From Anchors to Wheat

Chains are probably the most basic staple in the industry and yet chain styles are as varied as the people who buy them. Accounting for variations in style, color, material, purity, weight, width, length, and clasp, we've got an impressive catalog. Here’s a handy guide to the most frequently requested styles:

Anchor Chain: Featuring uniform oval links fortified across the center, these chains are indeed modeled after chains used to tether boats to their anchors. Heftier sizes are often worn as-is, especially by men, and variations include beveled or diamond-cut finishes. Also known as a marine or maritime chain. 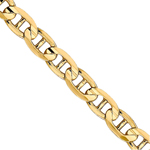 Ball, or Beaded, Chain: Instead of links, ball chains are composed of metal spheres spaced by little connecter bars at regular intervals and are most frequently used for dog tag pendants. Fancier styles alternate smooth or diamond-cut round and oval beads. 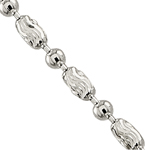 Bismark: Neatly soldered parallel links give these supple chains a mesh-like look, but without the stretchy give. 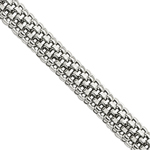 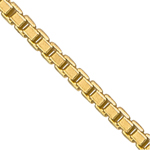 Byzantine: Formed by a repeating pattern of vertically and horizontally linked jump ring pairs, this design has ancient origins dating back to the 5th century.  Byzantine chains tend to be substantial yet highly flexible. 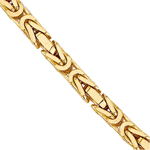 Cable & Curb: The most neutral chain is formed by linking single round, oval or pinched oval loops. A Curb Chain starts out as a Cable Chain whose links are twisted just enough to lay flat. Heavier Curb Chains may be diamond-cut or hammered and are often known as Cuban Chains. 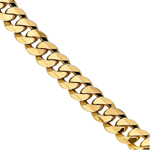 Figaro: Similar to a Curb Chain having flattened twisted links, but instead of uniform links, a pattern of 3 to 5 short links punctuated by a longer link is repeated. Originally an Italian design and purportedly named for the popular Italian opera The Marriage of Figaro. 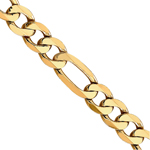 Franco: Interwoven uniform V-shaped links tightly joined together and sturdy enough for heavy pendants. Classic Franco Chains have a squarish profile, but variations may be rounder or flatter and feature a diamond-cut finish. 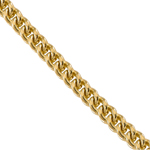 Herringbone: Cleverly fabricated with multiple rows of flattened V-shaped links arranged so that the direction of each row is opposite the row next to it. Different colors can be used in the alternating rows creating two-tone and tri-color chains. These low-profile chains have a highly fluid look. 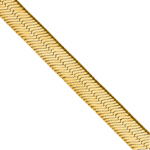 Omega: Comprised of small, wide metal plates aligned next to one another and crimped to an underlying mesh substructure, collar-like Omega Chains are bright, shiny, and often reversible. Great for slides or for wearing as-is. 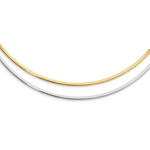 Rolo: Flat or half-round wire links are squashed into concave molds to make them rounded and then linked into a chain. Popular for charm bracelets, they are also known as Belcher or Baby Belcher Chains. 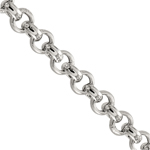 Rope Chain: Has the appearance of two, or more, twisted strands of chain spiraled together. It is made with twisted links that are each connected to two other links in a continuous row to resemble a woven fiber rope. 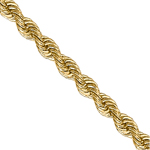 Singapore Chain:  Features links that are interconnected to form an elongated diamond structure that is then twisted and flattened to form the chain. The twisted chain reflects light from all angles making it shimmer and shine. Also known as Sparkling Singapore or Twisted Curb. 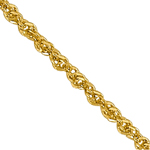 Snake Chain: Created with a tightly joined, machine-made curb-style chain that is drawn into a flexible tube. The tight weave has a zig-zag effect resembling snakeskin in either round or square style and is available with a diamond-cut texture. 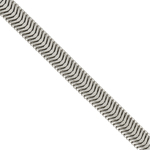 Wheat (Spiga): Made with small figure-eight shaped links that all point in the same direction forming a braided look with a squarish profile.  Available in numerous millimeter sizes and diamond cut styles.  Also known as Spiga or Espiga Chain. 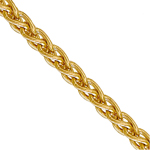