Early in the 1900s, due to the scarcity of naturally occurring pearls, a technique for cultivating pearls was created. The procedure (which could take up to 24 months), involves inserting a tiny bead (of polished shell) inside an oyster or mollusk to act as an irritant, forming a cultured pearl. Pearls are timeless and exquisite in the traditional sense.

Cultured pearls are classified by their origin (South Sea/Tahitian/Akoya/Freshwater/Mabé) and then graded by size, shape, nacre (pronounced "Nay-ker") thickness, color, luster, and surface imprefections. When selecting cultured pearls, these attributes are not deemed equally significant. Knowing the cardinal Five Characteristics of Cultured Pearls will help you choose the perfect one for you. However, the phrase "beauty is in the eye of the beholder" should always be kept in mind when choosing a pearl.

These pearls are cultured in the northern waters of Australia, Indonesia, and the Philippines. These pearls are considerably larger than Akoya pearls and much more sensitive during the cultivation process. South Sea pearls are naturally white, cream, or golden.

These pearls are slightly smaller than the South Sea pearl but are also sensitive during the cultivation process. The colors black, silver, and gray occur naturally and they are cultured in Tahiti as their name implies.

These pearls were the first type of pearl to be cultured. Japan and China are the main producers of these pearls. They are consistently round, which makes them perfect for strands. Colors range from white to cream, though some can be gray or black.

The freshwater pearl is usually slightly less round, smaller in size, and possesses less luster than other varieties of saltwater pearls. These pearls are usually cultivated in China and provide a value-priced option.

Instead of growing inside an oyster or mollusk like other pearls, the mabé pearl grows against the shell of the oyster, creating a dome-shaped pearl. This pearl is harvested, then assembled. The nucleus is removed and replaced by resin, while mother-of-pearl is used to cover the flat back. Mabés traditionally have high luster and lower prices than round pearls.

Cultured pearl experts consider luster to be the cardinal factor when assessing the quality. For them, luster is a single important quality indicator that differentiates between exceptional or spectacular and inferior or ordinary cultured pearls.

The beauty you perceive as light passes through a pearl's nacre (pronounced Nay Ker) is known as luster. A pearl's luster is the consequence of countless layers of a natural organic substance known as "pearl nacre" that the oyster or mollusk secreted to create the pearl. Pearl's luster increases with nacre thickness, allowing light to refract through tiny prisms from the depths of the nacreous layers, finally reflecting from the pearls’ surface, giving each pearl its distinctive lustrous appearance.

D&D Jewelry in Walnut Creek, CA, only supplies pearls with excellent luster. The luster of pearls that we provide is natural and untreated, which is significant because, with proper care, their beauty will not fade with time.

The size of the pearl depends on the size of the oyster or mollusk in which it is formed. The price of a pearl may not be considerably affected by its size; however, when combined with a perfectly round shape and a very high luster, the value will rise significantly. Cultured pearls are usually measured by their diameter in millimeters. They can range in size from tiny seed pearls that are less than one millimeter in diameter to mature South Sea pearls that are twenty millimeters in diameter.

Cultured pearl shapes span in decreasing order of value from round to near-round and from oval to drop, with circular and baroque shapes being more contemporary. Some shapes can command a higher price because they are more uncommon or because they are more in demand. Therefore, the scarcity of certain shapes or the popularity of others can result in a premium price.

Pearl shapes from round to drop are considered fairly symmetrical by the pearl industry's standards, whereas anything baroque designates a pearl that is freeform or entirely asymmetrical.

Cultured pearls come in a variety of colors; most range from white, cream, and yellow to rose, silver, and black. The majority of pearls have a “primary color” that you will notice first and a “secondary color” which is the overtone when you take a closer look. The appeal of various pearl colors depends on personal preference. White, or white with slight overtones, is the most popular color.

Although color variation does not reduce a pearl's value, it becomes crucial when choosing pearls for strands, earrings, bracelets, and other jewelry. 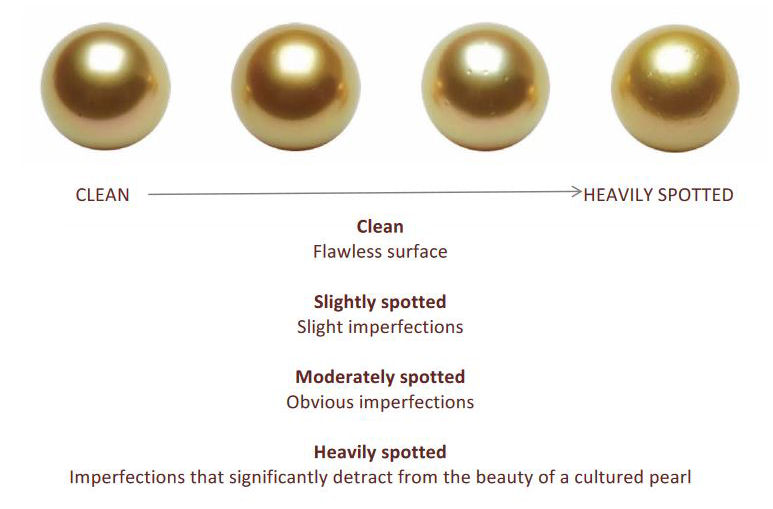 Depending on the quality, depth, or visibility of the imperfections, the surface characteristics of pearls may or may not diminish the pearl's beauty.

The pearl nacre is an exquisite calcium carbonate crystal matrix that the oyster deposits in a tile-like, layered pattern. The nacre's appearance is influenced by a number of variables such as whether the calcium crystals are prism-like or flat, the precision with which the tiles are laid, and the fineness and number of tiles. When the tiles are arranged in a perfectly uniform pattern, the nacre will appear identical over the entire surface of the pearl, producing the ideal flawless pearl.

Some tiles may be imperfectly laid due to their natural evolution over time. This causes imperfections and blemishes to form beneath the nacre’s surface. The form and appearance of these imperfections are usually referred to as the pearl’s complexion. Surface complexion or surface imperfections refer specifically to the presence, abundance, or absence of physical marks or blemishes. When assessing surface imperfection (also referred to as cleanliness, blemishes, bumps, pigmentations, or spots), remember that cultured pearls are grown by live oysters in their natural habitat, so there are many uncontrollable and unpredictable environmental forces that affect the surface.

We have jewelry professionals ready to help.